Took the Grey Rabbit from NYC to SF Summer of ’77 and again Spring ’78. $69 / 69 hrs. In ’77 the bus broke down in Wyoming but some very cool freak in a blue school bus gave us all a ride. Sat next to the driver going down the Sierras deciding which turn to break on and which to coast ’cause there sure wasn’t enough brake left to use on all of ‘em. Opened a bottle of Jack and passed it around as we finally arrived in SF. A record for the most people bumming a ride at once?

Danny, Sloan, Linn, Daphna – any of you ever happen upon this, reply here. I’ll check in once in a while… or just ask around if you’re in Telluride

Boarded the Rabbit , ’77 or so, at a warehouse in lower Manhattan. Rode all the way to SFran. I think it was $60 or thereabouts.

What a marvelous concept: old 50-s era bus whose seats had been removed, except the first row behind the driver. Remainder of Passenger area replaced with false floor equipped with trapdoors. Luggage went into the trapdoors; passengers rode above on big foam mattresses — with our sleeping bags, guitars, Southern Comfort, and drugs.
( Hitchhiked back to NYC, where I was making my home. )

Broke down at least twice. Didn’t stop multiple rolling romances nor mass skinny dip at a reservoir somewhere in Colorado. ‘Hard to imagine these Miley Cyrus Days we’re now living through will produce such memories. (Some of the best I carry around in my head.

But ya never know.

This brings back memories… took the Rabbit from SF to NYC in August 77… fare was $69 and the bus, an old Greyhound/Trailways I think, was mainly mattresses and bunks with a few seats upfront. Registered under (I think) “Church of Community Consciousness” to avoid the interstate licence. I remember bathroom and eating breaks at truckstops and a mid-trip dip into some sort of reservoir or lake… and Salt Lake City drifting by in the early morning in a stoned horizontal daze… met some great people, including Mary B (you out there anywhere?) who kindly provided a NYC crash pad at the end for myself and a couple of others… a unique trip and the nearest a naive British first-timer to the US was going to get to being “on the bus” (in the Kesey sense) in the late seventies!

I road on the Grey Rabbit from NYC to Boulder Co. with my girlfriend and our dog to spend the summer camping. I remember one of the 2 drivers names was Captain Cookie. I think it was 1977.

I rode the Grey Rabbit in 1977. It cost me $40. from the N. Berkley Bart station to someplace in Ilinois. I was going to Chicago but the Grey Rabbit didn’t go there on it’s journey East so they let me off where I could thumb a ride the rest of the way . I had a lot of experience hitchin’ so I was cool with that. I was recently discharged from the Navy about a year and a half prior and about the only thing I owned was a 650 Triumph Chopper w/ a coffin gas tank on a stock ridget frame which I left w/ a friend from Laney College in Oakland. As a matter of fact we rode it to the Bart station, where he dropped me off and he rode it back home. When we arrived the drivers came over to check my bike out. I told them what my arraignment and how much it meant to me and hated to part w/ it. They actually said for $40. more they would tie somehow to the back of the Bus and take it with. I almost went for it but decided not to as I was returning to the Bay Area and did’nt want to chance being stuck w/ it in Chicago and having to leave it there. Those were priceless times filled w/ eccentric, interesting and colorful individuals along w/ a wonderfully memorable adventure unavailable for the young of today. Not to mention all the smoke, mushrooms, and wine we all shared. They also had journals that people would write things, draw pictures, or just doodle in along our journey. What ever happened to the journals. One could publish a compilation of them that could document a unique time in American history. I know I’d buy a book such as that.

Found some old ledgers from 1977
I think people may find them interesting.
Summer trips made between 1500-1700 each way.
Drivers were paid between 250 to 300 each way.
Winter trips would make around 1000 each way. 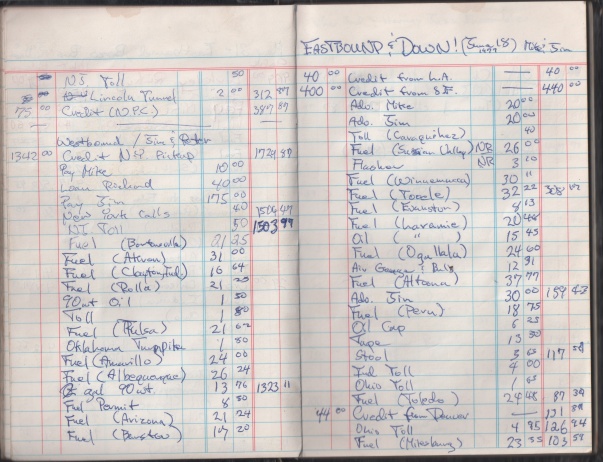 Back in the 1970s I used to work at Willow Beach Resort & Marina along the Colorado River in Arizona. The Green Tortoise bus would come down there about once a month wanting to rent some small boats from me to go upriver from there and enjoy several of the natural hot springs that are in that area (right below Hoover Dam). Whenever I would see that bus pull in I was automatically in a good mood because I knew that night I would be partying with them in our parking lot.

However, I just ran across a link to this page quite by accident and after reading about the Gray Rabbit Bus, I now think I may have missed the real party! Too bad I didn’t know ya back then 😦