My name is Kevin Jennings from Fairfield, CT. I had just gotten discharged from the Navy in Hawaii and had to fly back to CT to bury my Dad in November 1981. By early January 1982, I had about $130 left to get back to Hawaii. The Grey Rabbit would at least get me to my Aunt’s house in LA for $90. About 10 of us were picked up next to Madison Square Garden on an overcast and frigid afternoon. The mattresses and floor boards were lifted up to stow our bags under and then replaced. We settled in for a 3 day trip across America. The front of the bus had 2 rows of seats, then mattresses all the way to the back where a pair of bunk beds made an aisle to the private crew’s quarters at the back. I landed just forward of the bunk beds and made friends with the folks within earshot. There were no music boxes, so some weed and a guitar set the mood and the highway sounds lulled us to sleep. I made an acquaintance with a lovely girl named something from somewhere. There was just enough privacy to get to know each other well. There was a dog wearing a bandana whose best friend in the world was anyone eating. Dog’s owner was one of the friendly drivers. The driver sported a beard 35 years ago back when the last time beards were in. The driver also had his lovely wife and an adorable girl named something who could somehow move up and down the bus without stepping on anyone, a skill that the dog did not have.

I have no recollection of the 2nd day but I’m sure it happened, probably more weed and guitar. I do remember stopping in a rest stop for dinner and I somehow found a shower, then another night’s sleep as America slipped under the magic bus. I have to say that being able to lie down is the only way to travel. Sitting for hours and hours is not comfortable and given the choice I still go horizontal.

We stopped in St. Louis and picked up a few more passengers including a beautiful and very friendly girl from Haiti. The other passenger I remember was a guy that could juggle. Anytime we stopped, he would start juggling which is always a crowd pleaser. I remember after one stop we were some miles up the remembered that the little girl was left behind. A U-turn and a joyful reunion and we back on the road. We hit some deep snow over the Rockies and stopped to help a car that had run off the road.

Our last stop before LA was in Barstow, CA just after sunset, where we loaded up on bottles of liquor to augment our weed to sustain us through the dangerous desert crossing. Our desert crossing was a little different from the group of Oakies in the movie “The Grapes of Wrath”. Grandma didn’t die and our agricultural products were not inspected. We did however have a fine party culminating in none of your business. Me and another passenger were dropped off in LA and the Grey Rabbit continued north to San Francisco and out of my life.

I’ll never forget that trip. Good people of all ages and from all walks of life treating each other with respect and friendship, sharing food, drink, weed and stories across a beautiful country. I doubt the Grey Rabbit could operate today, however myself and thousands of others are grateful that it did for so many years. Thank you to all of the people that made that singular experience possible. 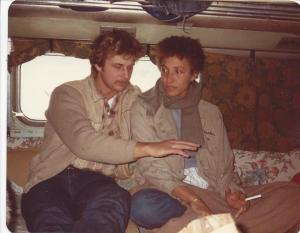 I took the grey rabbit (although the “t” was missing) from SF to Buffalo via Seattle in August 1982. We went via Seattle to pick up 14 kids from a Haarlem theatre group with their teacher (who was ill with cancer) and the love family who were involved with looking after them. The crew were Bob, Don and Doc. The trip was the best single trip I have made (and I’ve cycled from London to China). It finished with Doc being arrested in Ohio with the bus being surrounded by a dozen armed police and the kids singing love songs.

If you know the story behind Doc’s arrest I would love to hear it. If you would like to hear more about my trip I can send you details along with one or two photos

Kevin My name is Kevin Jennings from Fairfield, CT. I had just gotten discharged from the Navy in Hawaii and had to fly back …

I was on the bus where “Doc” got arrested. For the past 30+ years, I’ve been saying it was a Green Tortoise trip, but many of your details match mine: the kids were from the Dance Theater of Harlem, and some “love” hippies had brought them across the country and were taking them back to NYC. I don’t remember a person with cancer; I remember a little monk-like guy who seemed to be their temporary guardian telling me his chosen name was “Won,” not like number “one,” but like “won” the race.

I could never remember which state pulled over the bus, but I remember them taking names, place of birth, and social security numbers! And the kids were screaming and crying, because they were from the inner city and a bunch of cops were pointing guns at them, and Won got them to start singing to calm them down. Kids were not the only ones crying. It was scary, but after the sheriffs went through nearly all of the adults, Doc materialized from hiding in the back of the bus. They cuffed him, put him in the back of a car face down and disappeared…it was crazy. I always thought it was in South Dakota, but you may be right that it was Ohio – I just remember how big and flat the countryside was, and how surprising it was how they caught up to the bus and then went out of our sight so quickly in such flat country!

Also, Doc was not technically part of the bus staff – he was a guy who made himself charming and useful and had been riding the bus back and forth across the country for months because he was on the lamb!