I drove the Grey Rabbit for the four years while attending chiropractic school in portland OR (79-83). Every friday afternoon a driver would come down from seattle and a group of 20 or so people would be gathered around the ride center chick (my gf meg) who put posters up around town and took calls. We’d all hop on, wave goodbye to meg and pick up more folks in Eugene. Soon we’ld stop for a soak in a huge hot springs in the national forest and arrive in Bezerkly then SF at the haight before noon. The return trip included a swim in shasta lake getting me to ptld before, usually, my first class. This run was a natural follow on from the early days where Lester, a very cool but sometimes misunderstood fellow started it all by bringing the east coasters out west to begin with in school buses and later retired LA diesel 4-speed coaches. There was also “another grey rabbit” and the green tortoise, still operating (legitimately) today. If stopped we were just a bunch of friends camping, although I did spend a night in jail in Eugene once. There were so many experiences we all had in those days that I can only recount a few. For thanksgiving we has 2 buses going south to san fran and mine (my favorite mission trails) conked out and we had to put all 87 people and all their luggage in Don’s bus for the final 4 hours. I ended up succeeding in bleeding the air out of the fuel line and ended up passing Don’s bus an hour from the finish line. Imagine an empty bus with all the curtains flapping in the wind with an open door cruising by in the pleasantly hot california sun. Don decided to just get there and not put our folks through any more roadside attractions. Another time Iwoke up (in the drivers bunk) in eastern OR, after driving most of the night on a x-country run. When I returned from the truck stop facilities the bus was gone heading east without me ( it was assumed that I was still crashed). I had to get a fast ride to overtake the bus and hopped on after flagging them down. This was all done without cell phones. Imagine making dropoffs at 15 different places and arranging to meet 2 weeks later without cell phones. I’m sure there are storiesof forgotten passengers but none of ours were nor were there any injuries. A good time was definitely had by all.

Rode the Grey Rabbit back from the West Coast to NYC late July 1983. Heading home after a backpacking trip up in the Canadian Rockies. A lively group of Rajneeshpurum folks were on the bus. I remember a young girl, Ayesha. She must be around 40 now. We stopped at a hot springs and what I thought was called Voodyroos State Park, but can’t seem to find it on google. Great way to travel across the country. I’m sending a photo: 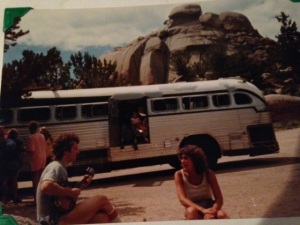